Difference between revisions of "How to install Wordfast Classic"

You can download and install the demo version, or, if you own a license, the full version.

When WFC is installed, it is inactive when you open MS Word. When you want to use WFC in Word, press Ctrl+Alt+W. This will activate WFC and its toolbar[3] will appear in Word.

Mac users: Before pressing Ctrl+Alt+W, make sure to go to Tools/Templates & Add-Ins menu, and check wordfast.dot to activate it. 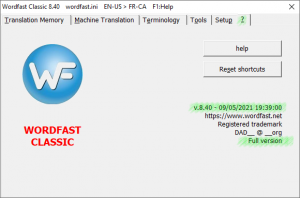 The version number and license status in WFC.

After you install WFC (or any time in future), you may want to check:

To do this, open the WFC settings window by pressing Ctrl+Alt+W or by clicking on the rightmost icon on the WFC toolbar and access the ? tab. The details are shown there.[4]

If your version is older than the one available at the download page, you can update your WFC version to the latest one.

To update your WFC version to the latest one, follow the above instructions to download and install WFC. The new version will replace the older one, while your settings, translation memories, etc. will remain.

If you are using a very old WFC version[5] (not recommended), you will need to unlock the demo mode manually by creating a license number. You may also need to do this if you are using WFC in a computer that has no internet connection[6] for an extended period of time.