Wordfast Pro 5.x and above is much more advanced and project centric in terms of project management than its predecessor, Wordfast Pro 3.x. The newer version allows you to create a project, export it as a package – roughly equivalent to a zip file which contains source files, reference files, bilingual files, linguistic assets and project settings – and send it to someone else so they can recreate the project on their instance of Wordfast Pro to perform the task they have been assigned. A user may also want to export a project in order to work on it on a different computer (laptop vs desktop).

Once you have created a project, there are two ways to export it:

After clicking on the Export Package icon, you will see the following window: 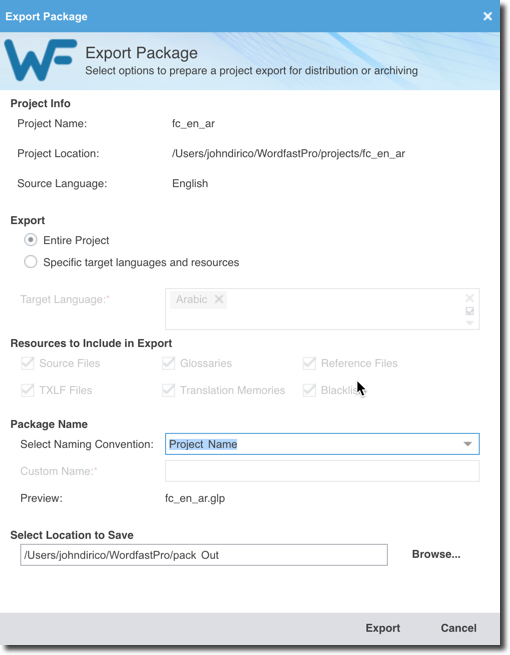 Under the Export section, you have two options:

You can then give the package the same name as the project (if multiple target languages, each package will have the target language’s codes appended at the end) or a custom name.

Finally, choose a location to save the package to. The saved package has the extension .glp.

There are generally two scenarios when importing a package:

From the Project List view, you can either drag and drop a .glp package into Wordfast Pro or click on the Import Package icon, then select the package.

In the Import Package window, you will then see two options: 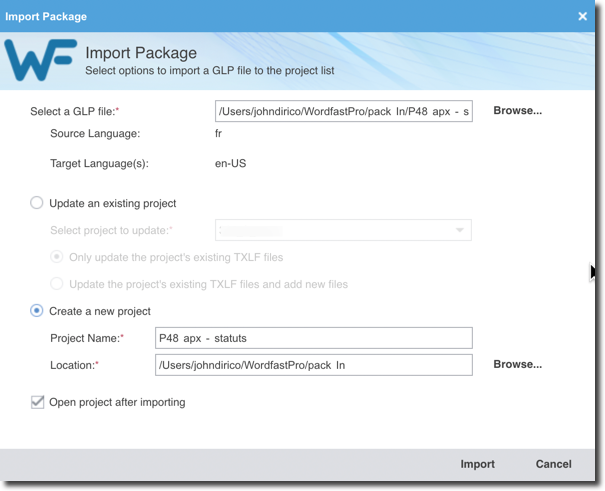 You need to choose the Create a new project option, then specify the name and location you want to create the project.

Open the project you had previously created, then drag and drop the package you received from the translator into the open project or click on the Import Package icon. Wordfast will pre-select the option to update the existing project. You should choose Only update the project’s existing TXLF files unless a file needed to be added to the project by the translator after the project was already underway.

Click on Import and you should see the Complete status bar move to 100% (if the translator marked all segments as translated).