The Wordfast Anywhere Project Manager is a tool for....

A WFA project is defined as a collection of files (DOCx, PDF, XLSx, PPTx, etc.) to be translated, in various language pairs. Files are assigned to linguists who can play various roles, e.g. translator, proofreader, QA.

You, the Project Manager (PM) remains in control of resources: files to be translated, TMs, terminology (glossaries).

Those resources are only shared for the duration of the project, and can be revoked by the PM at any time.

The PM assigns linguists to roles (translator, proofreader, QA) in order to process files until the files are ready for delivery to the client.

The PM has an overview of progress at every level, and can set deadlines.

The PM can issue offers for jobs or roles to WFA users (accounts) who have opted to receive job offers.

Personal data, Project management details, Files, TMs, Glossaries and, generally speaking, all data, are considered privileged information and remain confidential. Wordfast Anywhere will never share or disclose privileged information. We have been in translation technology for over 20 years, as translators ourselves, we take confidentiality seriously and will continue to do so. We do not monetize your data.

Note that the scores and comments that a PM records on a linguist's performance also remain strictly confidential, and are available only to the PM.

Wordfast Anywhere only facilitates the organization of translation projects.

Wordfast Anywhere has no responsibility in the conduct or outcome of translation projects and/or the interaction of PMs and linguists, or the contents of files.

Please consult our Code of Conduct to be observed when using Wordfast Anywhere's Project Manager.

Best practices to use Project manager. 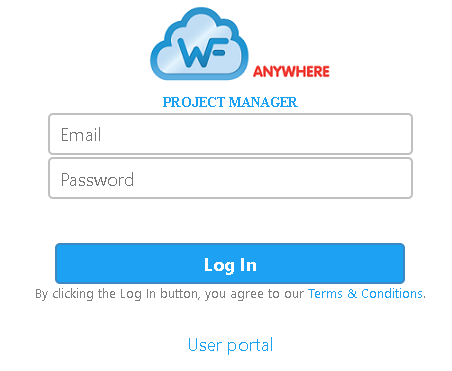 Use User Portal link to login into WFA as a standard user.

Once you are connected to WFA as Project Manager, the workspace appears.

This should look similar to the following screenshot (depending on the browser, operating system or device used to access WFA):

Some of this buttons will be available when more than one file is selected from the list.

Some of this buttons will NOT be available when a project is opened.

This tab has the tools concerning a project.

This are the basic buttons:

Projects will be listed here. Double click on one project or select it and use Open from the top menu bar to open the project.

Use Workspace (root project) to open the Document Panel to see the list of documents as in the standard WFA log in.

Some actions on the documents only can be done from the standard WFA Document Panel. This actions need to be done before the file is added to a project.

The project workflow should be:

PM has to prepare the files and create the team of linguists before creating the project.

New to create a new project. This will open the Project Properties window where the settings for the project are done.

The Project Properties window has three sections that need to be set in order to create the project. Setting one section opens the next one.

1.General
On this section general information of the project is set. This includes:

2.Workflow Builder
On this section tasks are added.

3.Language Pairs
On this section language pairs are added.

Once all compulsory fields are set, click on Save project to save the project and go to the Project Content panel.

It is the same than for creating a project, so check the section above to know about the different parts and settings.

Languages are added/removed from the Project Properties window.

Check Create Project section above to know about it.

From the Project Content Panel there are two ways to add files to a project.

On the selection dialog only files that have the same source language of the adding case will be listed. For bilingual files not only source must be the same, but target language also.

To remove a file, first use the checkbox to select it and then use the

icon on the language row.

Associated shares will be revoked.

Several files can be selected to be removed at the same time.

icon in the language row under the TM column to assign a TM to the checkbox marked files. 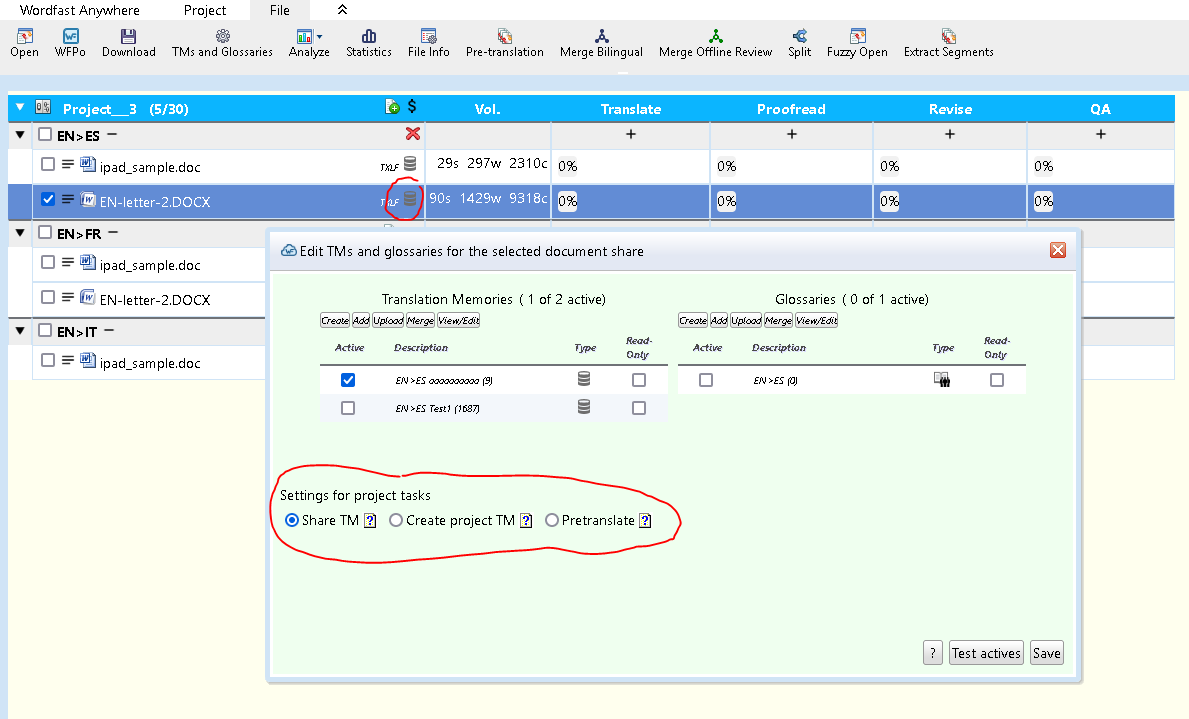 On the assign dialog the list of TM for the corresponding language are shown. Only one TM will be assigned to the files.

There are different options for the TM use:

Once a task has started we do not recommend to change this assignment.

icon in the language row under the TM column to unassign a TM to the checkbox marked files.

icon in the language row under the Glo column to assign a glossary to the checkbox marked files.

On the assign dialog the list of glossaries for the corresponding language are shown. Only one glossaries will be assigned to the files.

icon in the language row under the Glo column to unassign a glossary to the checkbox marked files.

icon in the language row under the job name column to assign a job to a linguist for the checkbox marked files. 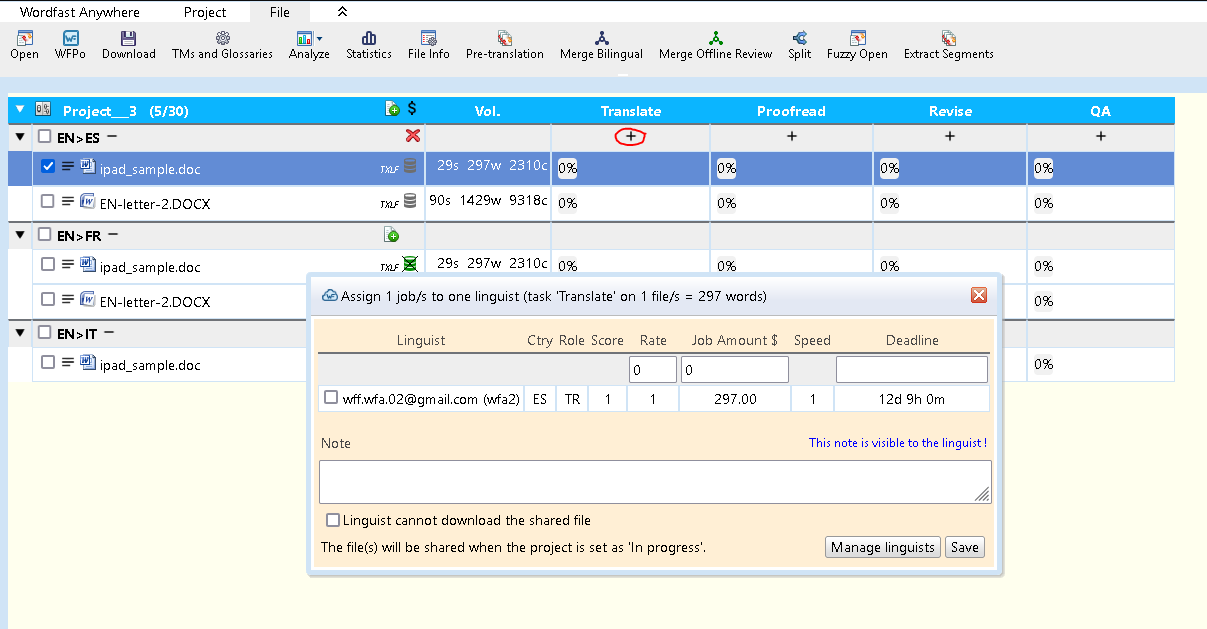 On the assign dialog task:

ONLY linguists marked as able to do a role will be listed.

icon in the language row under the job name column to unassign a jobto the checkbox marked files.

Move file to next Task

If Auto tasking is not set on the Project Properties window, when a task is finished (file has been revoked by the linguist), PM has to manually move it to the next task which will share the file with the linguist assigned to that task.

To do so, click on the double arrow on the finished task.

icon on the header will show the estimated cost of the project. Click on the icon again to hide costs.

The Manage Linguist window can be opened by using the

icon on the Project tab or the Manage linguists buttons on the Assign Job window.

This allows the PM to create a team of linguists that will be used on the project jobs.

The same linguist can be used in several languages and roles.

to add a new linguist. 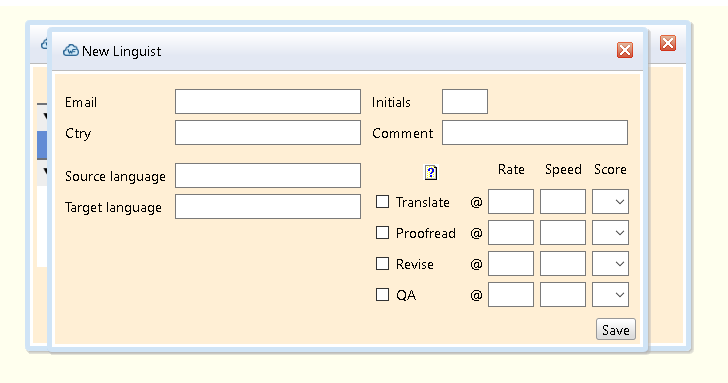 On this dialog you can set information about the linguist.

Clicking on any cell of a linguist will open the dialog to edit the information for that linguist.

The window is the same one of adding a new linguists and same rules apply.