of the File tab. 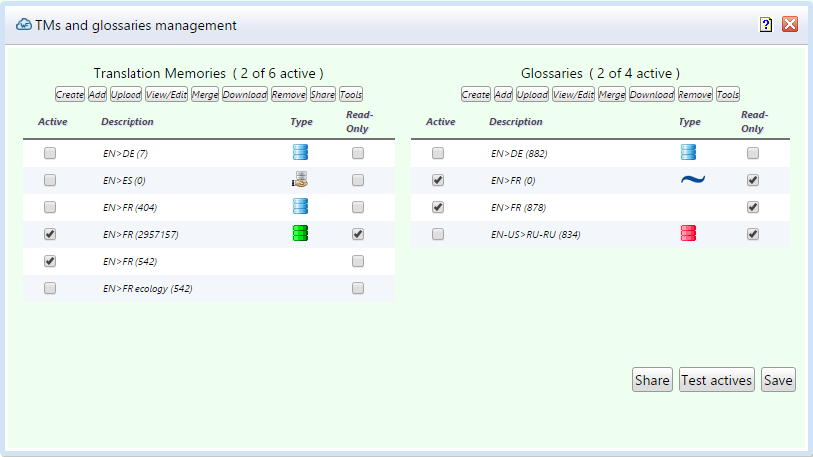 Click on the Create button on the TM buttons panel.

There must be at least one TM for each language pair you translate. For the purposes of our discussions below, we will use the French-English language pair. In the Source Language field, enter FR. WFA will then propose several different French variants. In our example we will use the France variant, or FR-FR. Now we will do the same for the target language: type EN in the Target Language field. From the several variants proposed by WFA, select EN-GB.

It is recommended that you have only one TM for each language pair. This way, you will benefit from everything you have already translated in each pair. However, there may be reasons for you to maintain different TMs in the same language pair. In this case, enter an ID using up to 10 characters in the Assigned Name field. Then click OK. Returning to the previous window, click on the Save settings button. Your TM has now been created.

If you have already created a TM you can now start your translation. The last TM that you used remains at your disposal until you change it. However, if you have multiple TMs, whether because you are translating more than one language pair or because you decided to create more than one TM per language pair, it will be necessary to select the TM to use for your translation, if different from the one used last time. To do this, if the document is opened go to Tms and Glosaries tab > Setup or if you are in the document manager list go to File tab > TM & Glossary

then select the row of the TM you want to use and mark the corresponding Active checkbox.

In this example, the choice is between an EN>FR or FR>EN TM.

Choose the one you need and click on Save.

Uploading of a Wordfast Classic or Pro TM

If you already have a TM that you use with Wordfast Classic or Pro, you can upload it to WFA. You can either upload it directly or add it to your existing TM.

To upload a TM, if the document is opened go to Tms and Glosaries tab > Setup or if you are in the document manager list go to File tab > TM & Glossary.

And then click on Upload to create a TM by uploading a file.

The codes for source and target languages are written in the header of the TM file. If you already have a TM in the same pair, make sure that you enter an identifier of up to 10 characters in the Assigned Name field. Finally, click on the Upload button. Returning to the previous window, click on the Save settings button.

To import a TM from Wordfast Classic or Pro into an existing WFA TM, click on the Merge button. The memory to import will already have predefined source and target languages codes in the header of the TM. There may therefore be a conflict of languages between it and the existing memory. If the languages are different, the merge operation will be rejected. By default, the merge process will not take language variants into account. If you want to make sure exactly the same variants are merged, tick the Check variant option.

This procedure is exactly the same if you have a TM from another CAT tool. However, check first that this TM has been exported in the TMX format, the standard file format with extension .tmx supported by all major CAT tool developers.

Depending on its size, uploading a TM may take some time. In this case, it can be run in the background, allowing you to perform other tasks while you are waiting.